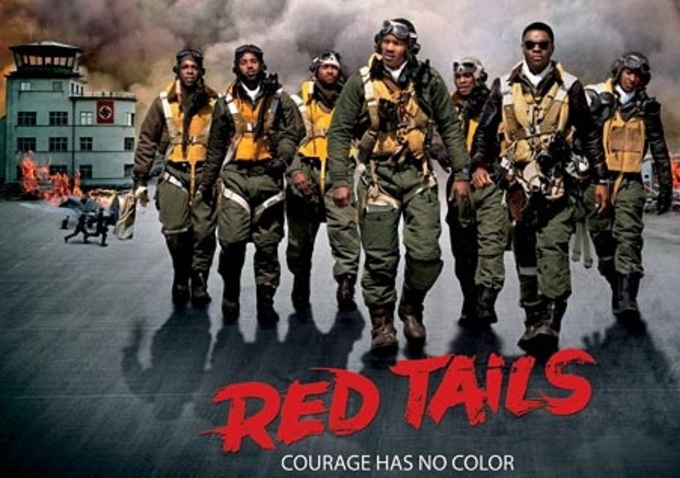 The hype around seeing the new Tuskegee Airmen film “Red Tails,” is kind of like voting for Obama.

If you don’t do it your black card might be revoked, the Dr. King photo on your wall will close its eyes and you will drown in a chorus of, “See this movie or die.”

One of our main dilemmas as a people is the fear of criticism within our community. But growth and improvement are the ultimate results of criticism. Without it we will never grow. Yet, constructive criticism rarely seems to come. And even now, knowing how strongly people feel, I am tempted to hesitate, to not even write this post. But I’ll do it anyway.

Medger Evers, and too many others, fought and died so I could have the right to criticize Terrence Howard.

And that’s just what I intend to do.

“Red Tails” isn’t a great movie. It’s not a bad movie either. But it shouldn’t be confused with a movement. Yet, this weekend’s opening was tinged with a lot of that.

I was privileged to see the film a few days before it opened at the Los Angeles premiere. And I was even a little excited especially since my frequent collaborator in controversy and employer had a little something to do with the film. But once in the theater I realized that for many in attendance this was a “BIG MOMENT.”

Older black people were proud to be there, almost on the edge of tears. There were hugs even before the theatre went dark. Although I originally set out to just see a movie I soon realized I was embarking upon a “moment” in black history. I was about to see a film with a majority black cast with a budget over fifty million dollars. My eyes watered. There was a smattering of kids; most dragged to the theatre by their parents in the name of experiencing history.

But here’s where it got tricky for me.

Somebody said we should pray before the movie, and since nobody has the guts to say no to Jesus … we prayed.

The movie starts and I was immediately hit with this sound — the sound that only comes from Dolby or big time technology. My eyes watered again. This was the kind of sound Madea wishes she had whenever she slaps a child for no good reason. It was a sound that could only come from “white money.”

From there on what was “good for black people” and what was actually “good cinema” became intractably conflated.

The living embodiment of this was Terrence Howard, who was among the films leading actors.

It is inconceivable to me how a person can add syllables to the word “colored,” yet Howard found a way. By the time he gave his fourth unwarranted soliloquy I found myself rooting for the Germans. And since he never changed his wardrobe I was hoping this was a trick like Bruce Willis in “The Sixth Sense” where Howard was really dead, but only white officers could see him. No such luck.

Then there was the white woman. There’s been a lot of back-and-forth in certain parts of the Internet over the lack of black women in this film. Not that anyone expected Lena Horne to show up and fly a plane — just that considering the age and the college education of most of the airmen, not one of them seemed to have a sweetheart back home or a wife. No faded photograph of “Ernestine” and talk about how you couldn’t wait to get back to Macon, Ga. and make an honest woman out of her.

But fine, maybe all the sweethearts and wives got cut for more dogfights. There aren’t women in many war movies, let alone black women. Yet nobody had an issue with his white girl?

Wasn’t it peculiar? I mean Emmitt Till was tortured for whistling to a white woman twenty years after WWII, yet this brother goes to Europe and pulls a white woman (from 10 thousand feet in the air, in a little plane no less) and never mentions to his fellow pilots that he has a white girl.

The 1943 version of me would have told everybody.

And the white woman just lets him into her house (without him having her address and in a neighborhood where all the houses look the same). She does this even though he can’t speak the language and he has a #### So what happens when her mother meet this Negro stranger? She goes for a ride with him. So in effect this brother pulls two white women without being able to speak the language while carrying a ####

Shaft was never this lucky.

Except maybe when it came to general black support and an overall lack of criticism of his many, many films — from Roundtree to Sam Jackson.

But the world isn’t perfect. And despite all of its flaws I support “Red Tails.” Someone — George Lucas in this case — took a shot. He put his money behind it and told the story he wanted to tell. I can’t help but applaud that.

I just wish I’d liked it more. I wanted to like it.

Today, there are two types of black films: Direct-to-DVD and Tyler Perry.

As a writer and producer of television and film, I am aware of the need to support African American fare. I just want the kid gloves to come off and to see a film like this get the “Saving Private Ryan” treatment — a story where an African American character overcomes himself and not just his skin color.

Madea finding her hot comb does not count.

It’s happened in individual instances. Denzel Washington in “Hurricane” and “Malcolm X,” Adolph Caesar in “A Soldier’s Story,” Morgan Freeman in “The Shawshank Redemption” and Angela Bassett in “What’s Love Got To Do With It” are just a few. The most recent of those films is over 12 years old. Yet I yearn for the day when it happens for all films rooted in our culture.

And for those films to come out at a pace at more than one film a year.

I know I’m being greedy.

But none of this will happen if we can’t be honest with ourselves and each other about the true quality of the entertainment we consume. Honesty is where it starts because from honesty we can assess and starts to get better.

So I’m going to get the ball going. I support “Red Tails,” but I think we could have done better. A lot better.

Who wants to join in?

One Reply to “On Red Tails, Hope, Hype and Criticism”