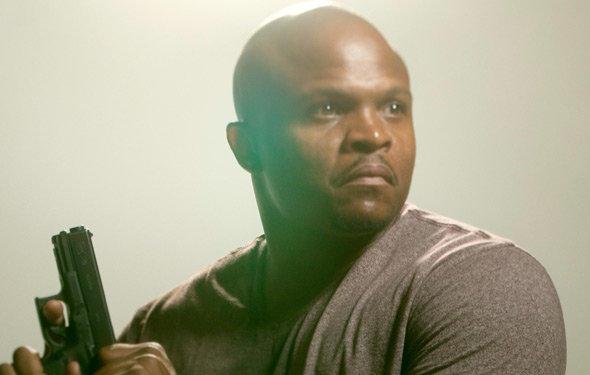 I love AMC’s “The Walking Dead.”  At the moment it’s my favorite show on television.  I love the effects, the cinematography—virtually every aspect of the show.

But there’s one thing that gives me pause …

“The Walking Dead” isn’t the first show to have problematic black characters, but the light of disappointment shines so brightly here because I love the show so much.

It hurts. It hurts like having a child who is a math whiz, but smokes crack sometimes.

Back in season one when filmmaker Frank Darabont was still affiliated with the show, there was a moment where a father and son, both of whom are black, took in the character Rick Grimes, a sheriff before the zombie apocalypse began.

We learn that the father lost his wife to the apocalypse and that he is determined to keep his son safe as he is all that is left of the family. As a zombie horde approaches the father’s home, amongst the undead is his wife.  She comes to his house as we watch her through the scope of his rifle – trained on her head.

He wrestles with pulling the trigger.  He wrestles with the acceptance that his wife is now a zombie. But he cannot pull trigger, for to do so would not just kill the wife, but the hope that life can return to what it once was.

I love that scene.  I love that character.  Yes, he was black, but he was human even more so.  He was a father, a husband.  He was scared, vulnerable, uncertain and yet heroic.  He was something so rare in TV and film, a black person with real character development and a storyline.

But then, after that one, solitary episode, he and his son were never heard from again.

Since Darabont left the show, most of the black characters introduced in season one (and all the Hispanic characters – no matter how interesting) have remained incidental, non-existent or presumed dead. The only shining example of a well-rounded non-white character is the Asian American Glenn – who is also my favorite.

Now, I can already hear the rumblings of the producers of the show who may not be of color saying, “What is it going to take to make you happy? We have more black characters then virtually any show on TV that’s not on BET, TV One, or a network owned by Ted Turner!”

I want “characters” who happen to be black.

So what’s my issue now since I loved that scene in season one?

I hated T-Dogg.  Much of it had to do with the fact that his name was “T-Dogg.”  Not Andre or Nathan, not even Lester, but T-Dogg.

T-Dogg always fell, he dropped the keys that lead to Merle cutting off his hand, he cut himself, was unusually adversarial, and he couldn’t fight.

Now, I’m aware that it’s a stereotype that all black men can fight. But in popular fiction, if your name has “Ice,” “MC,” “Lil,” or “Dogg” you must be able to fight.  It’s a television/film physics principle like gravity.

But T-Dogg couldn’t fight.  I never felt him lament the pre-zombie world.  No nightmares of a lost family, no longing for love, sex or power.  Just an incredible ability to fall at the most inopportune time.

But he did man up finally.  He gave a nice soliloquy … and then he died.

(I actually love that about the show.  Any time they dance, have a cookout or an incredibly nice moment, you can bet death by a zombie is a camera step away.)

But back to my issue.

T-Dogg’s gone.  But now we have Michonne!  And she’s a “bad ass.” It’s a term I loathe, as it harkens back to the O.G. days of “Shaft” or “Superfly.” She has an incredible understanding of zombie culture.  She can walk amongst them, keep them as pets and oh … how she can kill! As she stalks, skulks and sulks around to the point you half expect a narrator to shout: “She’s a bad Mofo!”  “She got a sword!”  “Say what?”  “Yo, mama! Gimme five!” “Get down wit yo bad self!” as she takes to the walkers like Bill the Butcher.

She doesn’t smile and ducks her head slightly like a pit bull ready to attack.

I’m cool with all of this.  Here’s my question.

When she and Andrea were captured by “The Governor,” Andrea quickly became the sexy vixen the Governor worked his Jim Jones Cult sexiness on. But Michonne? Nobody tried to hit it.  There was never even the threat of rape, as was the case later when Maggie was captured.

It’s almost as if Michonne wasn’t a “woman” in the classical sense of the word.  And in the world of “The Walking Dead,” she’s not a woman.

They are cartoon characters.

They are colorful no doubt. They make great t-shirts, but they don’t advance the idea of what great characters of color can be.  Are they better than nothing?  Yes, perhaps, but I’m saying yes through grit teeth.

I still love the show, but it doesn’t escape me that curiously, they are in Atlanta, Ga., aka “Chocolate City,” but the zombie demographic isn’t very Negro. Maybe all of the black people are hiding out, fashionably dressed, building up a funk- hip-hop fusion band that knows karate and kills zombies while pop locking as they speak in rhyme.

Maybe they’ll show up one day and stake their claim in the zombie apocalypse.

That would be “Bad Ass.”