Founded on April 11, 1910 as the Hospital for the Negro Insane of Maryland, Crownsville Hospital Center became a place where black people were traumatized, brutalized, and used as guinea pigs for experimental and military treatments. The state run institution was closed in 2004 and this is where fact becomes fiction and our story begins. An aging reporter with stage four cancer has been given six months to live. He cares for his mother who is suffering from dementia and nearing a point where she no longer recognizes her son. Accepting the reality of both her and her son’s lack of time, she unburdens herself of a long-held secret; a crime committed against black patients at Crownsville—experiments, death, hidden bodies. Having been a nurse there, she witnessed it all, but now with her mind debilitated, she’s lost major parts of the story. She begs her son to tell the patients’ story so she can go to her grave in peace. Our reporter considers his own plight of a mundane life. He once had dreams of making it at a big paper like the New York Times or Washington Post but resigned himself to his childhood home working for his hometown newspaper. That said, in all of his time at the paper, he never had a front page story, the kind that creates careers of note. Ending his time on this mortal coil with the biggest story of his career, one that would be splashed across the front page for all to see, would make as a nice button to his life as well as fulfill his mother’s final wish. So, he agrees to investigate the story.

After some poking around the city of Annapolis, Maryland, a former slave port with a rich political history which is the major city adjacent to Crownsville, our reporter finds that few wish to discuss both the past, or any potential crimes committed at the closed hospital which is set to be demolished. Taking a chance, our reporter enters the abandoned mental hospital and immediately, the souls of the patients, now poltergeists, attack him. Terrified, he runs for the hills. But upon reflection and a few more clues given by his mother and a shot of Jack Daniels, he returns. This time, the spirits open the door to their realm, transporting him to the 1970’s when an inhuman program akin to the Tuskegee syphilis experiment—in which black men were intentionally injected with the disease to see what the effect would be to the human body over time—was being run by the hospital, literally driving the patients insane. In the past, he puts the pieces together, but in the present, his physical body is breaking down due to the cancer. This began as a sort of ego trip for our reporter, but now he’s become obsessed with revealing the truth of what happened at the hospital. The clues in the past lead him to the former director of the hospital, now in hospice himself and near death. He tells all. This leads our reporter and police to a secret, unmarked graveyard where the bodies of the former patients reside. Our reporter, nearing the end of his life, writes his story, but collapses just as he turns it in, unsure if he’ll live to see it published. But at this point it lacks the importance it once had. He solved the mystery and freed the souls imprisoned there. He goes to his mother, explaining that he did what she asked, but she no longer recognizes him. On the day his story is published on the front page, our reporter dies. On the other side of life, he is met by the patients whose story he told, freeing them from the hospital. They welcome their hero into eternity. And for the first time in his existence, he is whole. 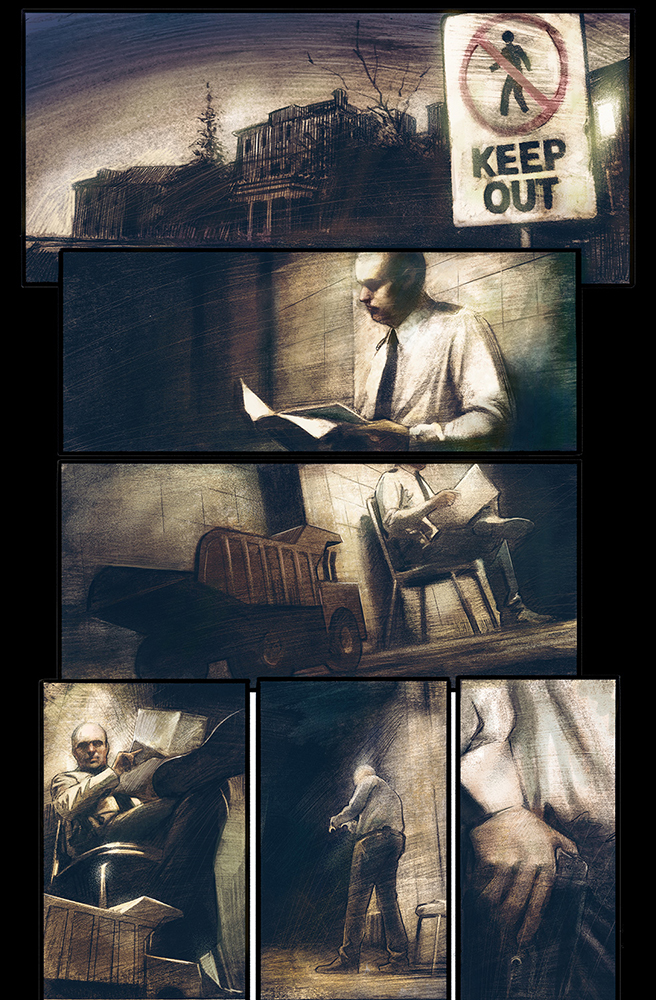